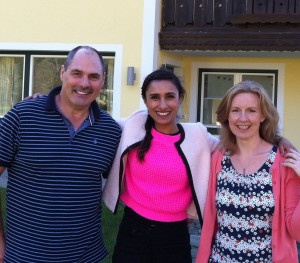 Being featured on the new BBC series ‘Escape to the Continent’ was not something we had envisaged – just a couple of months after opening Landhaus Lilly!

We moved in Austria in the summer of 2013 … and by the October we were (apparently!) the ‘local experts’ for Rob and Annette, a couple who were looking to move Austria.  It was quite an experience having the camera crew here, together with Anita Rani the lovely presenter.  We had fun during the filming – and have since welcomed guests here, who saw us on the tv 🙂

Netflix now has the ‘Escape to the Continent’ series available … we’re featured on the Salzburg programme – Happy Viewing!

Anita introduced us to Rob and Annette, who were hoping to move to the area and perhaps set up a B&B or a holiday apartment.  It was exciting to meet them, as they were potentially at the beginning of something new and challenging in their lives and their journey was similar to ours a few years ago…  Like them, we spent many hours (well, actually months and years!) … planning and dreaming and wondering whether we could realise our dream of moving to Austria and running a B&B.

We had our trials along the way – we missed out on a house in Austria we had hoped to buy, then after 5 months our house sale in the UK fell through at the last minute and we feared losing the rental property we had lined up to move to (before the ‘big’ move to Austria).  Then Paul had to have a heart operation … Then, the month before we moved to Austria, thousands of pounds worth of damage was done to the house following the flooding in Europe.  So, to be fair – it hasn’t been ‘plain sailing’ – but I’m sure most people who take up the challenge of moving abroad would perhaps have a similar story to tell.  We were also project managing from afar as we were still working in the UK whilst renovation works took place in Austria.  Paul was very busy with long shifts during the summer due to the Olympics and we were visiting Austria to meet with our project manager and the team of local builders every few weeks … it was a hectic time!

The original old smallholding did have a few B&B rooms, but you would have to use the showers and toilets at the end of the corridor.  We were fortunate that the rooms are a very good size – so we completely renovated and updated them so they now have modern en suite facilities. We wanted to keep some of the original Austrian charm and feel of the house keeping, for example, the carved wooden ceiling in the breakfast room, some carved wooden furniture and wrought iron work.

We wish Rob and Annette every success with their exploring so they too can find a place in Austria that they can call home.  Perhaps like us – they may also have people from all over the world come and visit and marvel at this ‘little piece of heaven’ as some of our guests have described the area!

1 thought on “BBC’s Escape To The Continent, Salzburg, with Anita Rani – now on Netflix!” 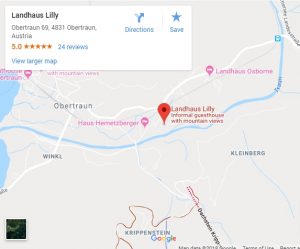